The Chinese have Sequenced the Maca Genome. Now what?

This article was published by Peruvian newspaper El Comercio’s science section. It is translated to English below. See the original article.

The Andean highlands have very adverse conditions: high winds, extreme cold, low rainfall and harsh ultraviolet radiation. However, Maca (Lepidium meyenii) survives there and has been sustenance for Andean populations since ancient times.

At first glance you notice that the leaves are small with serrated edges – less surface area – which reduces water loss and exposure to solar radiation. In addition, as the weather in the highlands varies little throughout the year, the leaves do not require vernalization (prolonged periods of cold) to flourish. However, other beneficial features are not so obvious and, to learn why, we must read and decipher its genome.

That is why a group of Chinese researchers have published the complete genome of our Maca.

The genome of Maca has about 750 Mb of information, with eight copies per cell, making them octoploides (humans are diploids with two copies of our genome per cell). Nearly half of its genome is composed of DNA sequences that can jump spontaneously from one place to another (transposable elements), and an analysis bioinformatic analysis predicts at least 51,000 gene codes.

Most interesting is that Maca had two gene duplication events 6.7 million years ago. This coincides with the time when the central Andes rose from 3,000 feet to 13,000 feet in altitude), which took just 5 million to 10 million years – a blink of an eye in geologic terms.

Gene duplications are key to the adaptation of a species to new environmental conditions. In this case, the genomic duplication gave Maca a wide range of evolutionary options for adapting to the harsh conditions of Peru’s central Andes.

For example, Maca has ten copies of the KNOX gene and four of the CUC2 gene insensitive to the MIR164A that gives it the lobed shape and serrated edges of the leaves. It also has genes that produce antifreeze proteins to withstand the extreme cold, and the UVR8 gene helps it tolerate extreme UV-B radiation. On the other hand, Maca lost the FRIGIDA gene responsible for vernalization in plants, although flowering occurs late by an unknown mechanism. Additionally, Chinese researchers have identified other genes that helped Maca adapt to the highlands such as the development of roots, seed dormancy and phosphorus assimilation.

The samples used for this study were collected in Yunnan, a province located in northwestern China. No one knows exactly how much Maca is being planted in that country, specifically near the town of Lijiang, but it is known that fresh roots left Peru illegally and there are already a number of patent applications – some already approved – in China, Poland and Korea. This is being investigated by Peru’s National Commission Against Biopiracy as it would be an illegal act.

But why so much interest in Chinese Maca? One explanation is that for a long time, Maca has been seen as a potent stimulator of sexual desire (an aphrodisiac) that can cure certain sexual dysfunctions, although there is insufficient evidence to support that claim. Apparently, the Chinese have many sexual problems because they are the main buyers of rhino horn, which they believe to have aphrodisiac properties and other nonsense like curing cancer.

The market for rhino horn is illegal and very few people – only the very rich – can access them. So Maca presents a more affordable alternative.

The problem with Maca is that it does not grow well in China because they have nowhere to grow it above 13,000 feet in elevation. Those heights exist in Yunnan Province but the climatic conditions are very different from the central Andes of Peru due to its latitude. In China, Maca roots look very different from Peruvian Maca as seen in these photos from The Maca Team: 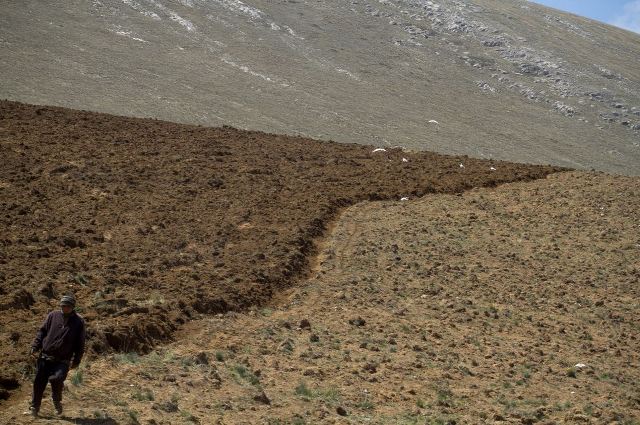 The Chinese wanted to know why Maca does not grow the same in China despite being cultivated at the same elevation as in Peru. So the main motivation of this study was to learn the genetic factors associated with Maca’s altitude adaptation. The title of the article reads, “Genome of octoploid plant maca (Lepidium meyenii) illuminates genomic basis for high altitude adaptation in the central Andes.”

And now they know…

For example, since the central Andes of Peru are at a low latitude (about 10 degrees from the equator), the amount of sunlight received during the year varies between 11.5 and 12.5 hours whether it is winter or summer. Plus, there is not much difference between cold, solar radiation and so on in each season. On the other hand, the town of Lijiang is located at a latitude 25 degrees above the equator. The amount of sunlight and weather conditions vary greatly for each season. When you have these large seasonal variations, vernalization results as a key process in these plants’ development. Maca does not have that. This could affect their adaptation to the Chinese land. It is an assumption that I make based on the data.

Now that they know the genome of Maca, the Chinese will be able to specifically improve those genes that allow Maca to better adapt to their land. And not only that. They can also identify genes of interest, perhaps to produce drugs or other industrial substances.

It’s great that the Maca genome has been revealed. We will also be able to access and analyze this information, which will be available to download once the study is published. But researchers from other countries with higher budgets for the science will access it first and leave us behind.

Of course, I will not deny the frustration I feel in knowing how this product left the country and has become a genetic study thousands of miles away (as happened with Cat’s Claw), tossing aside all national standards and international agreements. It may be that controlling our biodiversity products is very difficult for customs to enforce, but there are countries like Brazil that do it well.

However, what frustrates me more is that we never take advantage of the great genetic diversity that we have. We don’t allocate a budget to study it. We have no national research center dedicated to studying it. We don’t generate value with our biodiversity. We have a short-term approach. If we continue down this path, other native products will meet the same fate. We do not complain.

Luckily, the CONCYTEC and FINCYT now have more in their budgets than ever before. They are funding major research projects and training professionals abroad (scholarships for masters and doctorates) with the commitment to return and apply their knowledge in Peru. Also being developed is infrastructure for scientific research, etc. But it is still not enough.

However, this strategy has already been applied by China and Brazil decades ago. We have lagged behind. Let’s not keep doing that and allocate more funds to researching and enhancing the value of our biodiversity.

Note: In the article you will find the contact numbers and emails of the researchers in case you want to ask them things related to this study, or “cyberbully” them.

Peruvian Naturals at a Store Near You

Peruvian Naturals offers herbal supplements and natural foods from Peru in the United States and Europe. These products have been taken by the indigenous people of Peru’s Amazon jungle, Andes mountains and Pacific Ocean coastal regions for centuries before the Spanish arrived … Read more about us

Email questions or queries for special orders to colin [at] peruviannaturals [dot] com.

Sign up for the Peruvian Naturals newsletter. Every subscriber gets at least one freebie every year.